Our ferry is approaching the DFDS terminal located in the harbourSendre Frihavn (Søndre Frihavn on the map). In the mid-19th century, as a result of the growth of Copenhagen and the industrial revolution, Inderhavnen harbour became too small for the increased volume of sea traffic. In 1862, the city authorities, who had long discussed the idea of creating a free (duty-free) port in Copenhagen, decided to build a new Harbor to the North of the fortress of Castellet, capable of receiving modern ships with a large draft. The decision remained on paper for almost 30 years, and the new port would have remained in the dreams of officials, if Germany had not begun in 1887 the construction of the Kiel canal, which threatened to redirect sea traffic to German ports in the Baltic. In 1891, construction finally began, and just three years later, on November 9, 1894, the port was opened. The new port was named søndre Frihavn (Søndre Frihavn, southern free port, but it is not clear why "southern"...). By 1931, the port was expanded to cover an area of 82.5 hectares, and had a total length of 4770 meters of berths with depths ranging from 7.5 to 9 meters. On the right is the DFDS terminal.

Frihavn was divided into East (Østbassin) and West (Vestbassin) basins by the long wooden pier Midtermolen (Midtermolen, " middle pier"). There were single-storeyed warehouses all around the Pris, and at the Northern end, designed by Vilhelm Dahlerup) a huge warehouse in Renaissance style with a lighthouse tower 11 stories high was erected (photo from http://en.wikipedia.org/wiki/Midtermolen). Unfortunately, this remarkable monument of industrial architecture was destroyed by fire in 1969. In 1994, a modern building of the East Asian company (Det Østasiatiske Kompagni, or ØK) was built in its place. 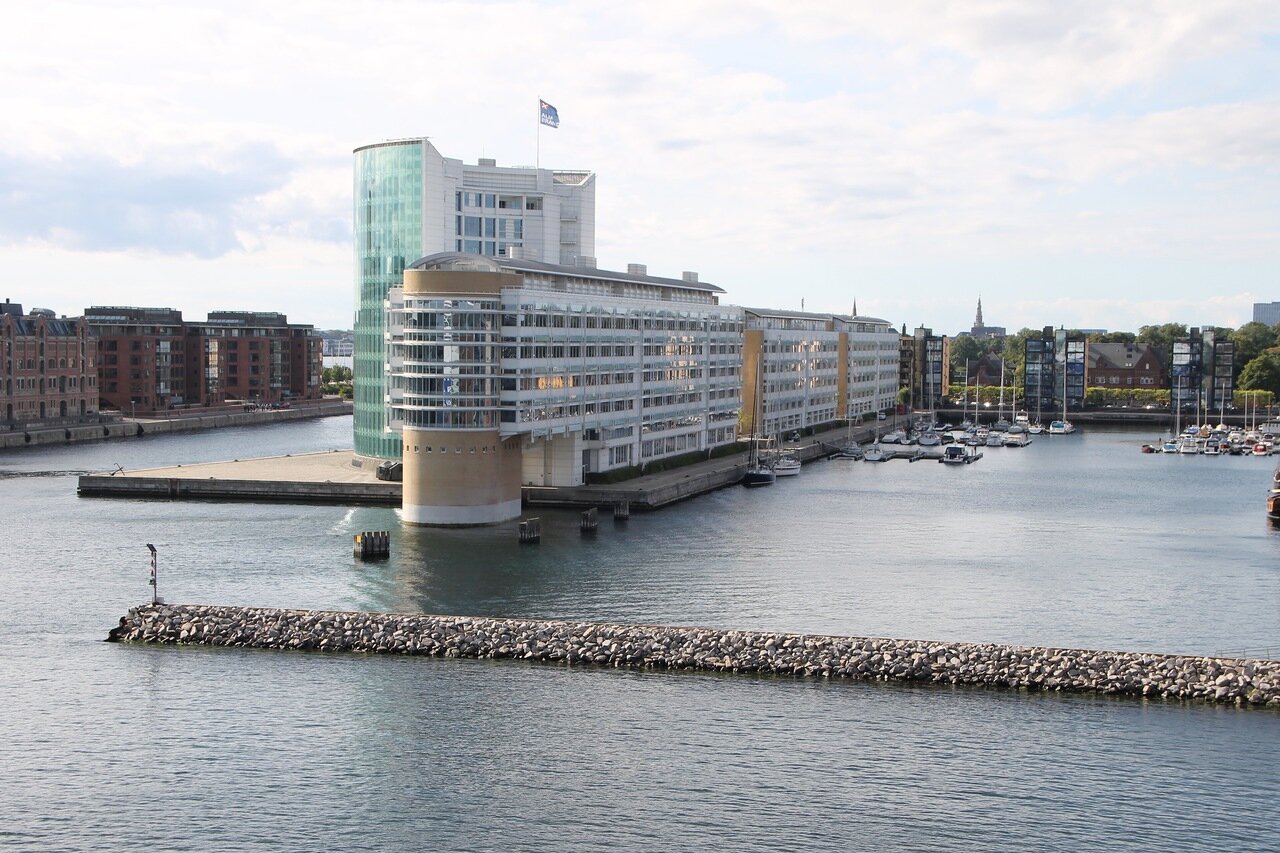 Svanemolleværket Power Station), a huge red brick building in the functionalist style built in 1947-53. The architect Louis Hygom (Louis Hygom) was inspired by the American industrial architecture of the 30-40s. 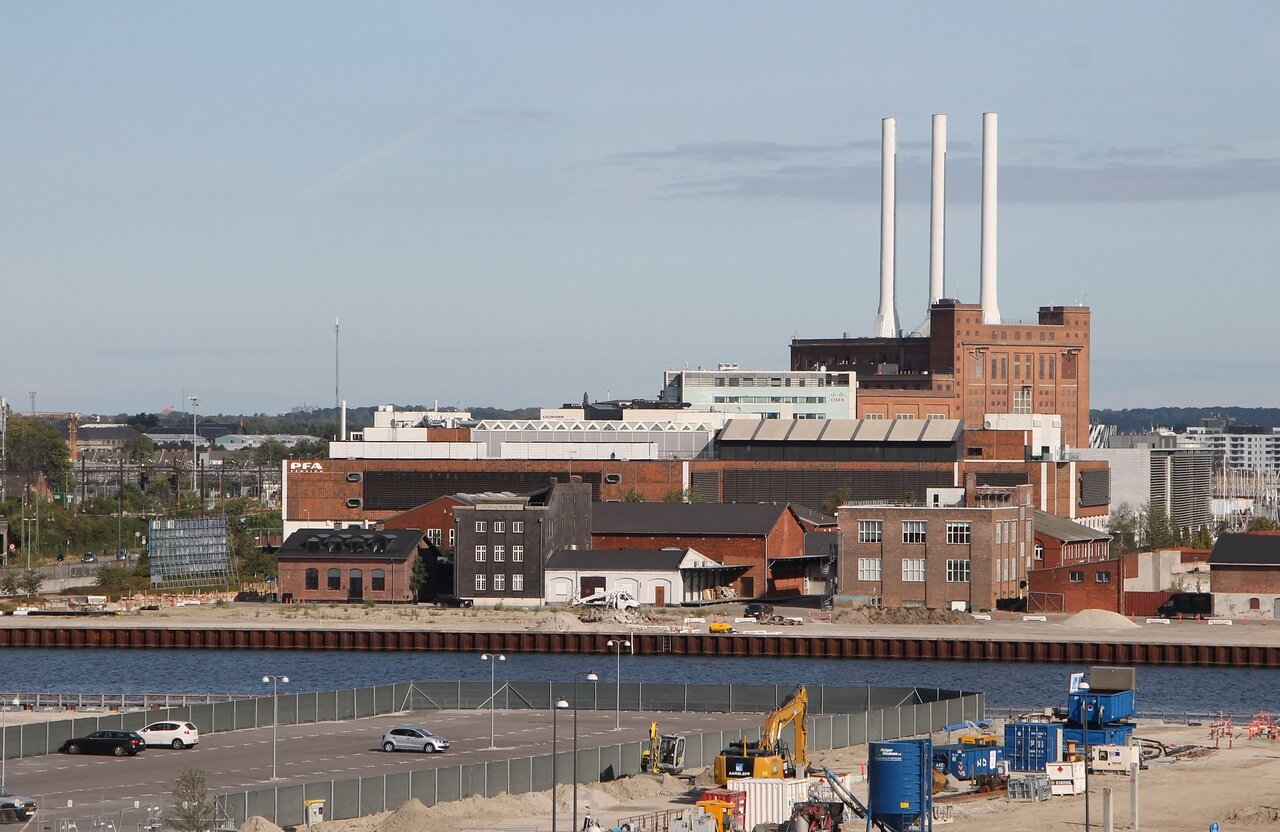 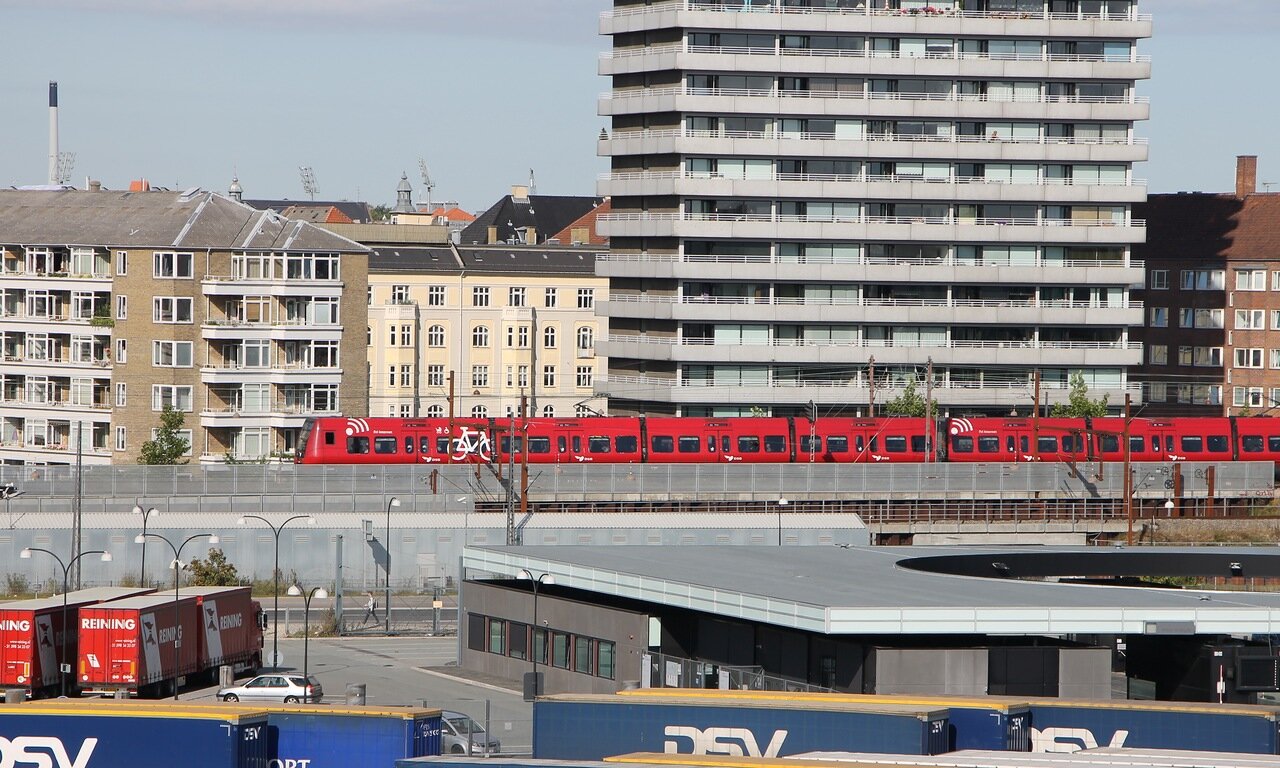 In the DFDS terminal. Such steamers sailed on the seas at the beginning of the 20th century. 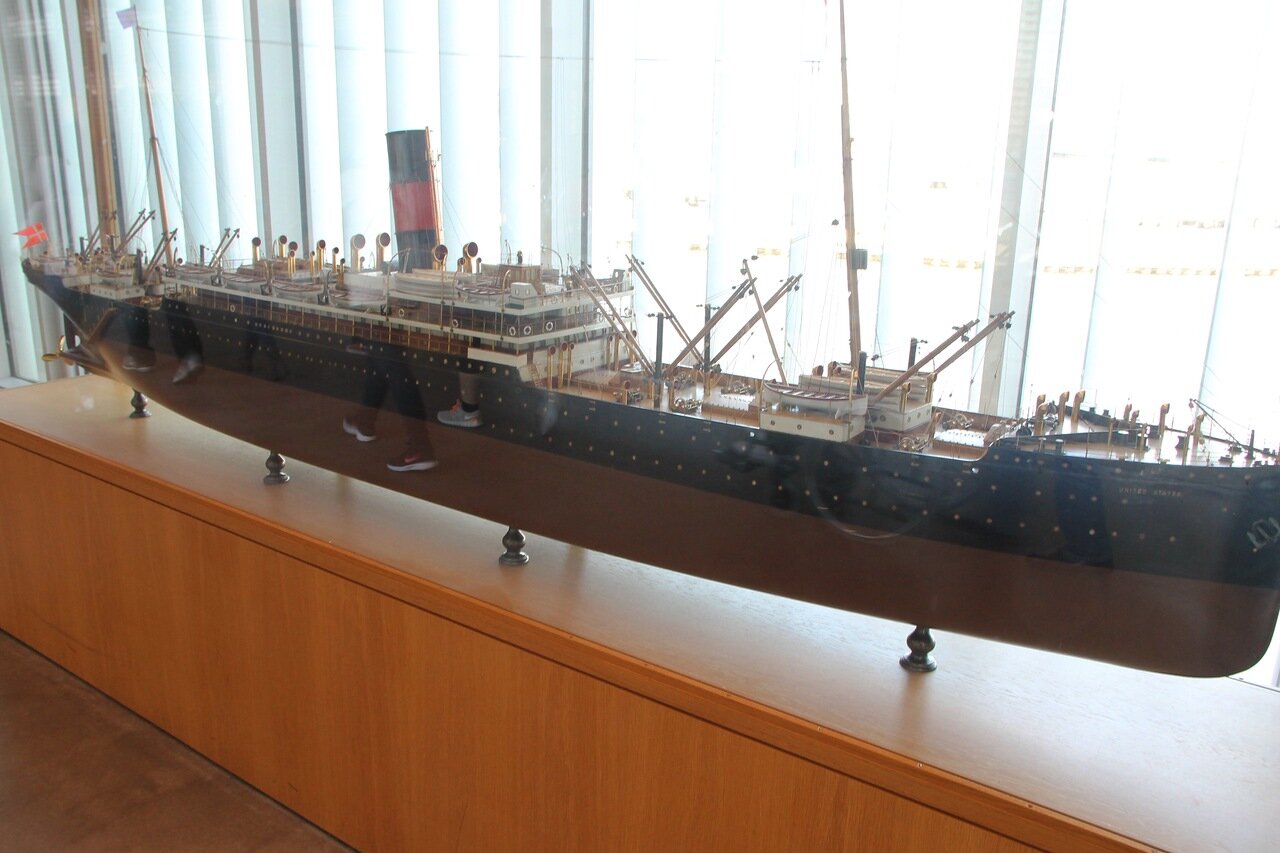 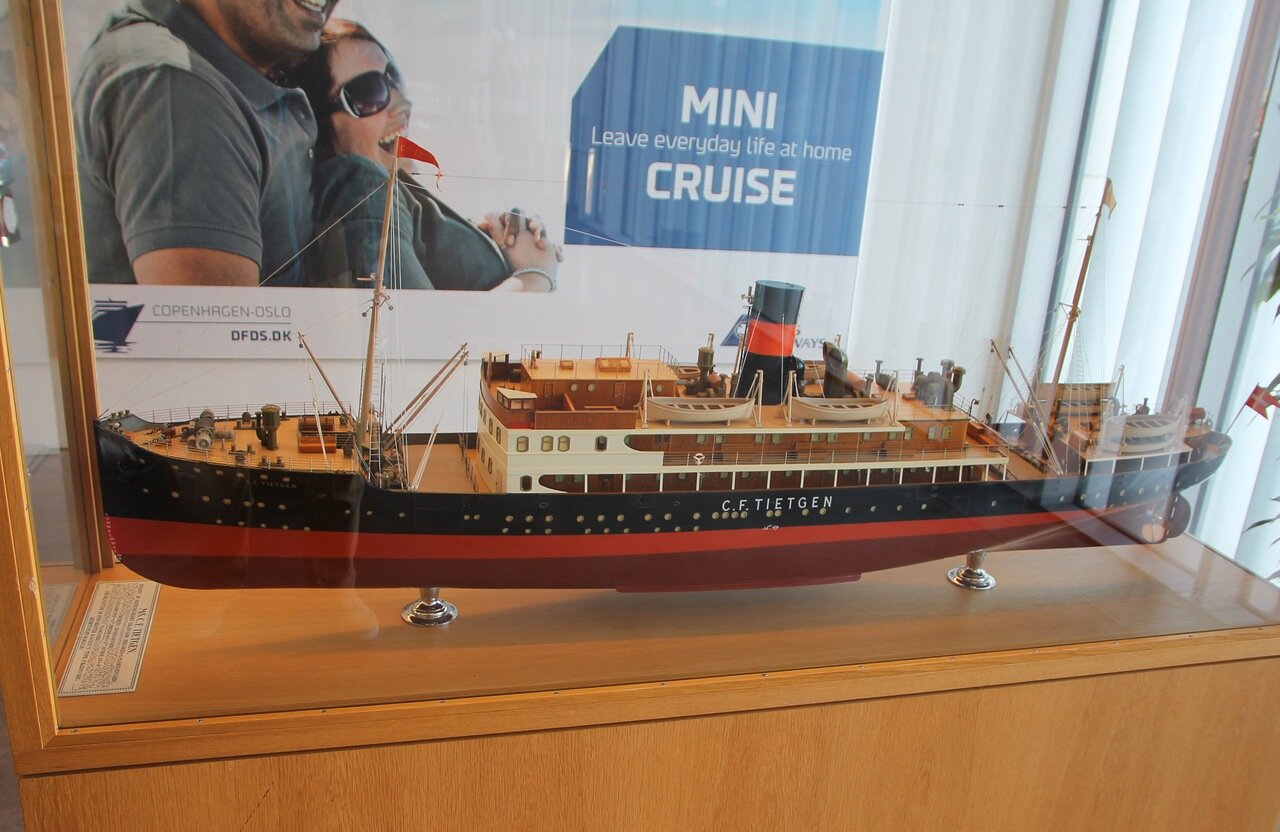 Here we will say goodbye to the DFDS Crown Seaways ferry and start exploring Copenhagen. 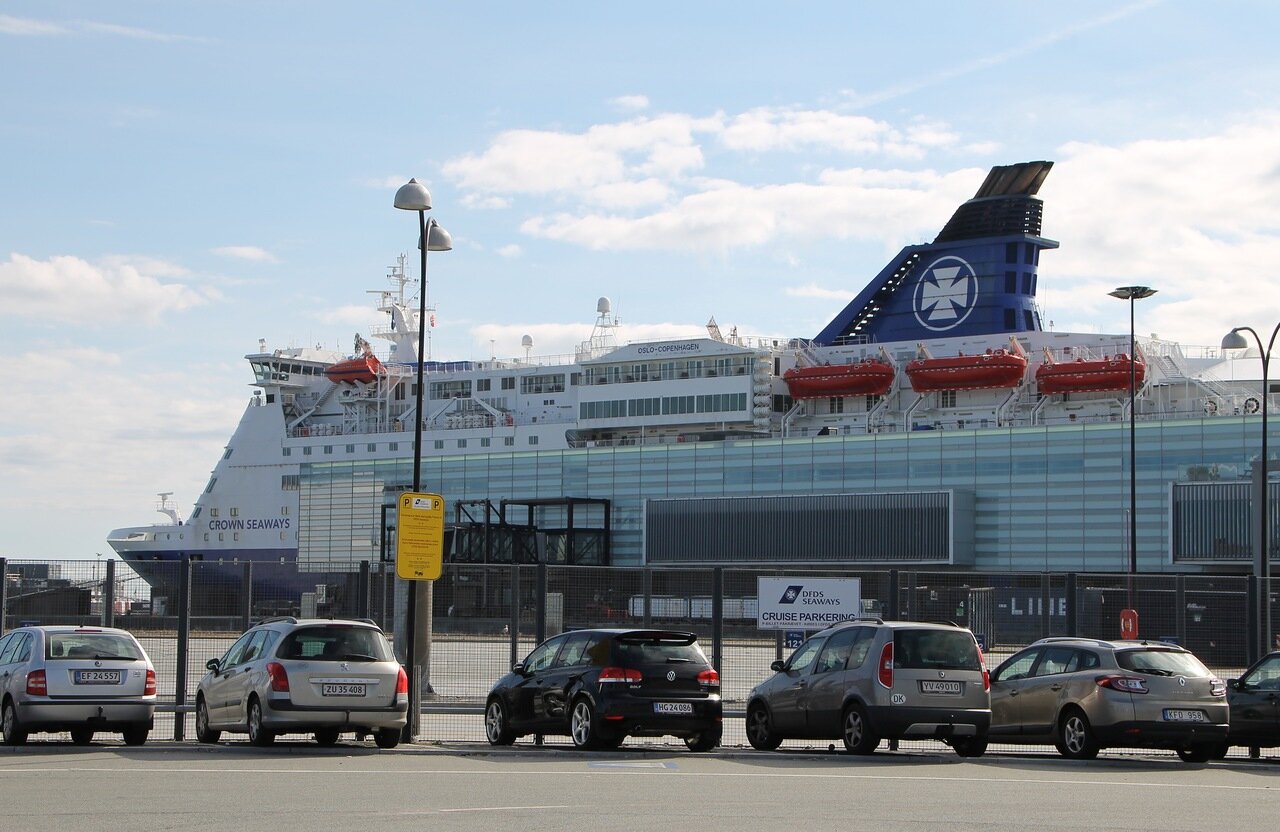